Mount Whitney, the highest pick in the forty-eight contiguous United States, culminates at the altitude of 14,505 feet (4421 meters).
As you can see further below on the photo of the plaque made at the summit, the altitude reads elevation 14,496.811 feet, which was computed using the older vertical datum (NGVD29) from 1929. Over the years, the Earth measurements have improved with the advancements of modern technology and things like the launch of GPS satellites in 1984. Thanks to the vertical datum established in 1988 (NAVD88) the summits altitude is now set to be 14,505 ft (4,421 m).

The trail is technically very easy and well paved all the way to the top. No need to have any special equipment. The advice though is to get good trekking shoes with appropriate socks to avoid blisters during the long ascent and following descent.
Carrying a lot of water was advised. I cant recall the amount but that was a lot. I think the goal is to avoid having our minds turn to mush because of the high altitude. Some suffer from it and some dont.
I personally did not drink much and all went fine. I was not ready to carry that much water and instead, I had brought the usual iodine pills to purify some water along the way if needed.

After thinking about it for a while we decided to hike up and back down in a single day.
The other option was to hike halfway up, spend the night there in a tent, and finish the next day. The problem with that second option is to carry the tent on the way up, leave it at the campsite the next day, fold it on the way back, and hike down with it, meaning a heavier backpack.
The first option means lightweight backpack but also means a much longer hike, and no pre-adaption to the high altitude, which I doubt is any useful because the campsite is way below the 4000-meter altitude where things change drastically.

After an easy and quick climb, we reached Lone Pine Lake when the first glimmer of dawn appeared in the East.

Early morning light on the granite

I remember looking up and thinking, 'I don't which one of these is the summit, but whichever it is, it is higher than any of the ones I see. And they seem to all be way too far away from here.'
From the start, the hike was more mental than anything else.


Then, a long pause between Wotans Throne and Consultation Lake to drink and eat light.

After that, we started the long ascent of the switchbacks, which looks easy on the map but in effect started to exercise our mental condition quite a bit.

Finally reaching the trail crest around noon, we crossed the mystical altitude of 4000 meters (13,123 feet).
From up there, the view is simply breathtaking and will remain engraved in my mind for as long as I live. Ive barely ever seen such majestic landscape. I could have stayed there all day. I felt perfectly fine with what I had seen so far and was ready to not move any further to reach the top.
Our group of friends had agreed early on to reach the top together or not reach it at all. Therefore, after a hearty meal, we all carried on.


Unforgettable view from the trail crest

The last chunk on the crest looked quite easy and tranquil on the map. After all we had just hiked up 1500 meters (4,900 feet), and we only had 400 meters left to reach the top. Peace of cake! In fact, we didnt know it yet, but the toughest part was ahead of us.

While standing still, all looked ok and normal.
But as soon as we started going up, any effort whatsoever was insanely more difficult than it should be. It was impossible to move at the same pace, with the same energy, all this just because of the high altitude.
It was not so much that the effort itself was difficult, but it felt more like there was no fuel left in the muscles to execute.
Later on, 100 meters below the summit, we could see it, like if we could touch it. But it looked like a moving target and we did not seem to get any closer.
The hikers who walked back down in opposite direction all looked happy saying, Almost there, just a few more minutes! We finally reached the top around 1:30 p.m.

The clouds had started to build up and we were afraid a thunderstorm would hit us before we could hike down to safety at lower altitudes. The signs on the trail were pretty clear about the leathal dangers of the storms. And it was said that even the shelter built at the summit cannot protect anyone from being struck.
After a short 20-minute break and a few pictures, we initiated the ride down.

The hike down was surprisingly easy. Like we experienced it on the way up, when no effort was needed, everything went smoothly.
Once the trail crest behind us, we took a look at the summit from the switchbacks but we could not see it, stuck in the clouds.
After Lone Pine Lake, we started to feel really tired and at the end of our rope. Our limits got seriously tested and the last chunk back to the car felt endless. We even had problems believing how easily it had been to hike that same trail on the way up, and in no time earlier that morning. It was quite interesting to see how fast we could walk at night compared to during the day.


Endless hike down to the campsite
as the sun comes down

Along our journey, we have crossed the path of quite a few fast and experienced hikers who seemed to have not suffered a bit from this adventure. A 100-pound runner even passed us on the way up somewhere on the final crest. That same guy ran back down before we had reached the top. But the sure thing is, we all experienced an extreme feeling of happiness and pride in the face of this huge personal achievement, and it created tight bonds between the young friends we were at the time.


Photo made the following morning
from our hotel in Lone Pine, California
1/24,000 Map of the hike 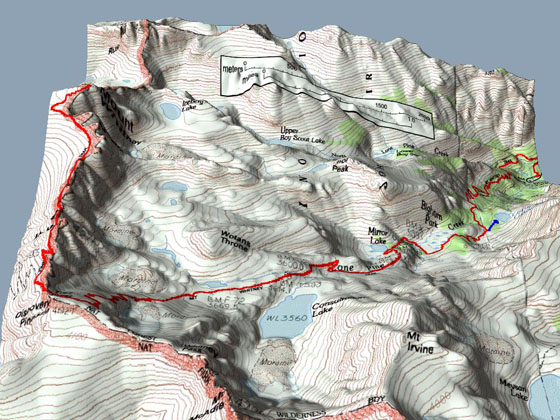 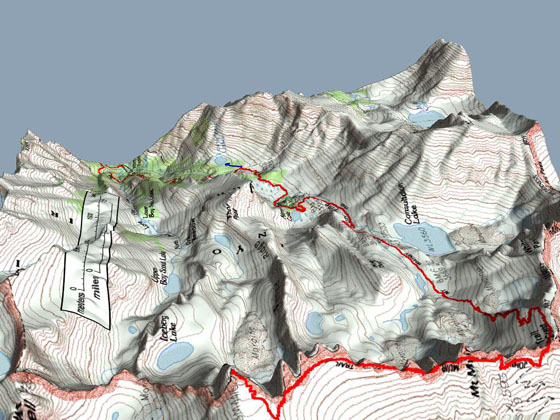 Great article and thanks for the info. From reading, this hike is not possible without a proper planning. As an average fit person, I hope to do to hike this before I get too old...